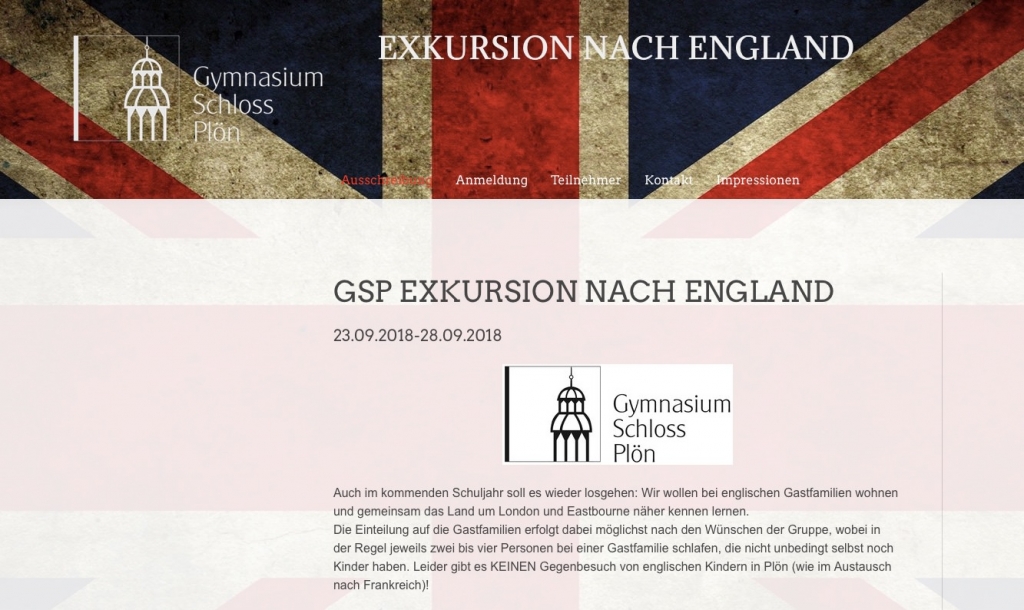 After the arrival we met our host families who were all very nice.” (Neele)

“While we were on the ferry, we had our very first conversation with a native English speaker. The lady was very kind and it was funny and interesting to talk to her.” (Leni & Eva)

“After arriving at our home for this week, we met our host family. They are very friendly and helpful and they have two little and cute dogs. There are also other students from Austria, Panama, France and also young Germans who come from Cologne. We eat together and they told us that they were very excited to learn English and live the British life.” (Adrian & Kai)

„I really like our host family but I think the dog is planning to attack us.” (Sarah)

“The cat is very lovely but I have never eaten that much cat hair before.” (Marie)

“We are living there with other students from different countries. Yesterday Adrian went to the toilet and saw the catastrophe: The French guy has no aim…” (Kai)

“I liked it when we went to the cliffs and Ole, Titus, Finn and I rolled down one of the hills.” (Brit)

“The TV is very important to our family. The first thing they do in the morning is switching it on. But Karen and Amber are so nice and we feel very welcome in their home.” (Emma & Meta)

“A few minutes after we arrived at our host family’s, we cuddled with their dog Teddy on our bed. Then he suddenly decided to throw up. It was a very warm welcome 😉.” (Leah, Janne, Viki, Moira)

“Our family is very small but very nice. The members are a nice granny (whose first name we sadly forgot) and Domino – the dog. He’s ten years old, so he’s a little grandpa, but he still likes to kiss Lisa – al lot. In the evening after dinner we often watch tennis or baking shows with them, which is always quite amusing (even though we don’t always know why she’s laughing).” Lotta & Lisa

“Sunday evening we wanted to talk to our host mum. We heard that the TV was on, so we went into the room. But there wasn’t the host mum. It was a man we had never seen before. Next day we realized that it was her son.” (Cosima, Emma, Marleen, Jule)

“We live with a very nice old couple who have a cute dog. Her egg sandwiches are very tasty and on Monday we saw a fox, which was very fascinating.” (Alina)

“Our host mum’s favourite hobby is making candles so it always smells pretty nice but the wax stains are everywhere. She and her kids are very friendly and sweet.” (Caro & Theresa)

“Bob is really friendly but yesterday evening he went out to get some milk. But in his fridge there were still about 10 liters of milk. Maybe he refuels his car with the milk because the tank is always empty.” (Titus & Mika)

“On Monday we told our host family that the bathroom door was broken and could no longer be closed. After that, our host father told us it was magnetic.” (Fiona)

“There is half a table in the living and dining area. If we hadn’t seen the other half folded underneath it yesterday, we would have asked where to buy half a table.” (Malina & Kaya)

“My family has a nice dog, Daisy. We like to cuddle her a lot.” (Merle)

“It was a very windy day, but we saw a flag and a red telephone box!” (Janne)

“On Monday, the weather unfortunately wasn’t the best. Nevertheless, the city of Eastbourne was very nice and the cliffs we were on were also beautiful.” (Neele)

“I really enjoyed the walk at Beachy Head because we were walking along the seafront the whole time and had a wonderful view.” (Laura)

“On Monday, we could go shopping and explored the city because we had a lot of free time. That was nice.” (Lenia)

“We enjoyed Monday because liked walk along Beachy Head and enjoyed the beautiful view!” (Moira & Viki)

“On Monday we had a picknick at the beach in Eastbourne. That was very relaxing and nice.” (Alina)

“We liked walking around Eastbourne and the cliffs! They were soo beautiful!” (Marlene & Marie)

“On Monday we walked along Beachy Head. The view we had was wonderful – the weather wasn’t…” (Lisa & Lotta)

“We spent half of the day in Eastbourne, where we did a city rally. After that, we were free to explore the city on our own. In the afternoon, we drove to the famous cliffs where we could immediately experience the English weather which was windy, rainy and cold. But, luckily, it went as fast as it came.” (Kaja)

“It was really fun walking along the cliff and taking pictures.” (Malina)

“We did a city tour and learned a lot about the city where our host families live. We saw the school, the train station and many other interesting places. There is also a very nicely designed cinema in “The Beacon” shopping centre.” (Titus)

“Today I took more steps than I have ever done in my whole life!” (Marlene)

“On Tuesday the castle was very interesting and the city centre was large and beautiful.” (Neele)

“We saw Dover Castle and learned something about the history of Dover, which was very interesting.” (Marleen & Jule)

“We went to Canterbury. We had a lot of free time, so we bought many souvenirs and explored the large city.” (Julie & Steven)

“It was really interesting to walk inside the Wartime Tunnels. And Dover Castle looked cool.” (Malina)

“On Tuesday we went to the supermarket and tried local sweets. Some were strange and some were delicious.” (Leonie)

“I really liked Canterbury! The city centre is old and pretty beautiful. I would visit Canterbury again! Our host grandpa is extremely friendly and I was surprised about the good food.” (Mika)

“On Tuesday we went to Dover Castle and Canterbury.

In the tunnels, located beneath the castle, we took a look around to learn about the British’s role in Word War II and the Napoleonic Wars. Then we explored Dover Castle from the inside. It had a great atmosphere. In the afternoon we went to Canterbury. We walked around the city and went into many shops. Unfortunately, we didn’t find any appealing souvenirs because a lot of them were overpriced. Altogether we had an interesting but exhausting day.” (Adrian & Kai)

“It was cool to see so many different people with fancy styles.” (Paula)

“On Wednesday I tamed many pigeons, so I had a real army behind me. I think everyone in the city was afraid of me… It was still very nice and I have never spent so much money in three days but there are so many beautiful things!” (Neele)

“’We don’t have to go to the shopping centre again! We’ve already been there twice!” (Ole)

“The Royal Pavilion was very, very pretty but I was standing in the shop for like 15 minutes and couldn’t decide which tea I was gonna get.” (Marlene)

“I liked eating a sandwich without cat hair. It was delicious!!!” (Marie)

“On Wednesday we were in Brighton. There were various shops in the city, but unfortunately the city was also very crowded and confusing. There also was a street musician who sang – that was nice.” (Steven & Julie)

“On Wednesday we had a lot of free time in the city and we wanted to go to a certain store, but the navigation system took us to the wrong place. As a result, we found a beautiful area with many small streets.” (Alina)

“Today we visited the Royal Pavilion in Brighton. The history is very interesting and we learned some facts about the British Empire. After that we walked around the city and the many stores. The day was nice and we enjoyed the atmosphere in the park.” (Kai)

“The day in Brighton was wonderful, there are a lot of fancy shops, for example ‘scoctopus’, a store for extravagant socks. There were some cool motorcycles, too, but when I asked a guy if I could take a picture of his motorcycle, he was confused and drove away ☹. At least who got a student discount at the bubble tea shop – the lady knows our plan for the trip now but I think that’s okay considering we paid less.” (Lotta & Lisa)

“The Royal Pavilion has Indian architecture on the outside, but looks Chinese on the inside.” (The tour guide aka Adrian)

“We visited the Royal Pavilion and were impressed by the design of the rooms.” (Fiona)

“Since I only spent my free time in Brighton at opticians because my glasses broke, I can now recommend the best shops to buy a brand new pair of glasses to everyone 😊.”

“Mr. Michaelis found a beautiful flower on the cliffs. He was happy as a little child.”

“Kaja, Fiona and I went to a book shop and I was impressed by how big the shop was.” (Malina)